What is Day of the Dead and When is it Celebrated?

Day of the Dead is a celebration that occurs in early November in Mexico and a few other countries. It is believed that deceased loved ones come back to the altars and cemeteries of their families. This celebration is a very joyful event where Mexican people celebrate the lives of their family members who have passed away and honor their spirits by setting up ‘ofrendas‘ (altars) with their loved ones’ photos, favorite foods and drinks and more.

See the Alebrijes and Calaveras on Reforma Ave

‘Alebrijes’ are colorful spirit animals that have body parts from various different animals meshed together. The first alebrijes were created in Oaxaca by the artist Pedro Linares Lopez in the 1930s. It is said that Pedro was inspired by a feverish dream that he had to create the alebrijes and was told in his dream that they were spirit guides. Alebrijes were originally made with papier-mâché but now many are also made of wood.

Every year for Day of the Dead, artists from around Mexico gather and create their own giant alebrijes and display them on Reforma Avenue. There are literally hundreds of these giant, colorful alebrijes that you can see and take photos with. Plus it’s a free activity which is an extra bonus!

Another thing to see along Reforma Ave is the ‘Calaveras’. Calaveras are artistic representations of skulls. They are often very colorful and artistic. Similar to the alebrijes, the calaveras are a popular symbol during Day of the Dead. You can walk along Reforma Ave and also see many colorful calaveras created by various Mexican artists. Some of them even have openings you can crawl into to take photos with your head sticking out of the skull’s eyes.

Every year in the Zocalo (also called the Historic Center/City Center) giant ofrendas and other decorations get set up for people to view and enjoy. An ofrenda is an altar typically set up in people’s homes to honor their deceased family members. Traditionally, Mexican marigolds, food (like ‘pan de muerto’ or ‘bread of death’ along with sugar skulls), drinks and photos of the deceased are set on the ofrenda. In the Zocalo, you can see giant ofrendas showing photos of presidents and other noteworthy Mexicans who have passed away.

The decorations in the Zocalo are different every year. Last year there were a few big ofrendas and tons of Catrinas (culturally significant female Mexican skeletons) all throughout the Center. This year there was a giant wooden structure connecting four ofrendas together. Around the structure, you could also see wreaths representing each state of Mexico.

This year, my husband, some friends and I went to see the La Llorona Show in Xochimilco. Xochimilco is located in the south of the city and is famous for its ‘trajineras’ (colorful boats) that you can ride along the rivers. To get to the show you need to buy tickets in advance, go to the correct pier and ride a trajinera to the island where the show takes place.

The show depicts the legend of La Llorona or ‘The Weeping Woman’. There are many varying versions of the legend. The version that the show depicts in one in which La Llorona had a brother who traveled to Tenochtitlán to confront the Spanish conquistadors. He left her while she was pregnant and when he returned, the Spanish followed and killed him. By this time her babies had already been born. While grieving, she offered herself and her children as a sacrifice to the gods in an attempt to protect the rest of her people.

There are showings of La Llorona in Xochimilco every Friday and Saturday night in October as well as on the Days of the Dead. You can read more about the Legend of La Llorona and how to see the show here.

Visit Coyoacán to Attend the Fair and See More Ofrendas

During Day of the Dead, you can also visit Coyoacán to see more decorations, ofrendas, a parade and a fair. Coyoacán is a beautiful area in Mexico City. It’s the part of town that Frida Kahlo and Diego Rivera used to live in together. It is even home to the famous Frida Kahlo Museum, ‘La Casa Azul’ (The Blue House).

I had so much fun in Coyoacán on Day of the Dead with my husband and our dog. There were tons of fair games to play and some really beautiful ofrendas to see. These ofrendas were under a big tent and there each ofrenda represented a different state of Mexico. Coyoacán also has lots of good street food and cute cafes so we ate lots of good food too. Even the famous artisan market in Coyoacán was all decorated with ‘papel picado’ (colorful paper flags).

Go Early to See the Celebration of Eternity in Chapultepec Park

I had heard through the grapevine that something really cool was happening for Day of the Dead in Chapultepec Park. When I looked into it online, I saw some really interesting pictures of a giant, lit up skull at one of the park entrances. However, when I went over there with my husband, we found that the park had closed all entrances except that one, and the line to get in was extremely long. We were told that the event was going to end in just an hour or two so we decided to go home. Honestly, I think the event that was going on there probably would have ended way before we reached the end of the lineup.

You can find out more about the Celebration of Eternity here.

Buy Pan de Muerto at a Restaurant or Food Stall

Pan de Muerto or ‘Bread of Death’ is a famous treat you can eat during the month leading up to Day of the Dead. It is a circular sweet bread with two crisscrossing lines on top, made to look like crossbones. You can find this at tons of different restaurants, food stalls and markets during Day of the Dead.

Attend the Day of the Dead Parade(s)

There are actually multiple parades that happen during the week of Día de Los Muertos. There’s a parade in Coyoacán and a ton of other places in the city too. The most popular parade, however, is the Great Parade. The Great Parade typically takes place on November 2 and normally runs along Reforma Ave all the way to the Zocalo. I haven’t actually been to this parade because last year I was in Guanajuato and this year I was in Coyoacán, but it looks amazing. Fun Fact: This parade didn’t use to exist. It was actually created after the James Bond movie, Spectre, came out and depicted James Bond wandering through a Day of the Dead parade in Mexico City.

This website often posts dates and times of the parades each year. Just make sure you double-check the site to make sure you are seeing the times for the year you will be celebrating. You can also sometimes find information on Trip Advisor. 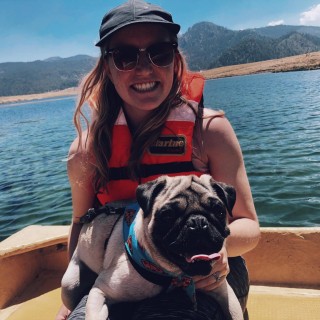